Well, after a very quiet 2015, this year has been wonderful by comparison for 2016! Quite exciting to see more expensive paintings and sculptures selling really well! Lots of artists, including me inspired to paint more, knowing more sales around the corner. The gallery feels more vibrant and we are getting more quality work in, continually, to replace sold stock.

The fabulous chicken wire sculptures by Ivan Lovatt, are creating a riot, as visitors spot a giant lion or wolf, from the street and squeals of exclamations about chicken wire etc are heard. Some great new work has been coming in by popular artist Kerry Nobbs, of big sky and sea landscapes and they have been flying out the door, as have the more expensive Robert Hagan paintings, which we cant keep up with! New stock arriving mid May. Some great pieces too.

I have started a Frida Kahlo series of paintings, and a client asked if I could do one that was funky and popped with colour, so I had a play and added Gold Leaf as well. She was thrilled and then people saw it and I got five more commissions!!! Looks like I will be doing more for a while. Also have designer Art Cushions to match with many of my paintings printed in Qld. on quality linen. Available loose for travellers or with inserts! 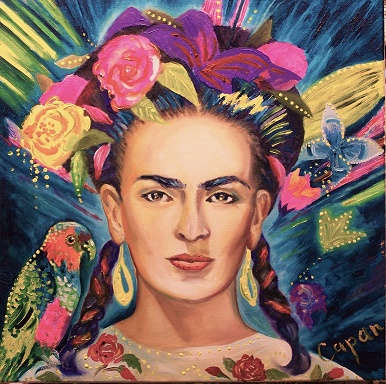 2014 is here and so is our fourth anniversay of the three shops, 'Capanart Gallery', Tamborine Living (homewares) and 'Two Birds & A Teacup', which has now been bought by new business owner, Tracey-Lee Napier, who has exciting and fresh business ideas.

The gallery has steadily and quietly built up a following of clients and new visitors who repeatedly say what a great selection of quality works we have on offer. We have a few new artists and I have also been experimenting in a looser expressionistic style of painting in both oils and watercolour, which has proven popular too! We are thinking we may have to build a bigger gallery, ha ha!! 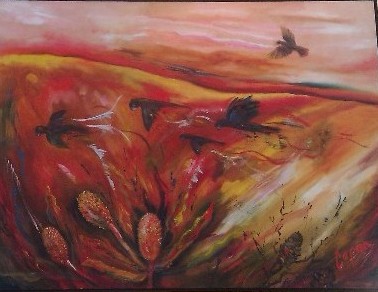 This year has flown and we are now enjoying our busiest time on the mountain as visitors come to enjoy our fresh mountain air and rug up in their winter finery, sit by log fires with hot cuppas and comfort food or picnic and enjoy the rainforest and views. These are the best months for the gallery and we have lots of fresh new work in to tempt the visitors. Some lovely Robert Hagan works, our biggest collection ever and some by his brother starting from $350.  Also lots of new work by Kerry Nobbs of glistening beaches and craggy cliffs and a nice assortment of smallery works which are going fast. I have been painting more abstract and contemporary style work myself including a brightly coloured Paris abstract which got sold in just a few days of sitting out the front of the gallery and I have replaced it with a similar styled one of Venice which is HUGE and another that is getting a lot of attention of Santorini with dribbled affect. Come in and get first pick of all the new ones : ))

Here's hoping everyone has a wonderful and successful new year of 2012.

After a very busy Christmas build up we are now getting all the families on school holidays coming through and getting great prices on original paintings and prints and the parents who are getting hurried through the gallery to see the other wonderful sights of Tamborine Mt. by their excited children, I throw business cards at with our website for them to look at in leisure after the kids go to bed, ha ha.

Come in now for some great discounts on quality artwork!! 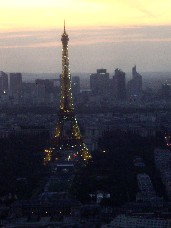 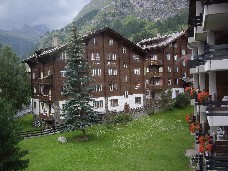 We have recently returned from a wonderful two and a half months in Europe and feel fully rested refreshed and inspired. We started in Milan and stayed for a week on lovely Lake Maggiore in Stresa, then travelled through Italy by train stopping in Florence, Rome and Sorrento where we were sitting in a row (there were five of us) outside a little ice cream parlour licking our ice creams when Pierce Brosnan and a female assistant came racing up the adjacent alleyway and jumped into a pink Fiat and sped away but not before my sister got  a photo. We found out they were filming a James Bond movie!  Talk about right place, right time, hehe!!!

Next we flew to Santorini, how fantastic it was, and then on to Croatia where drove from one end to the other including the inland Plitvice waterfalls which were amazing (although we had been there before) and wanted to show my sister and mother. On to Slovenia where we stayed on Lake Bled and were blown away by the magical beauty of the place including fairytale castle on a cliff overlooking the lake. Then Venice for a week to live like a local and shop 'till we dropped, and Switzerland, Paris for a week, UK and up to Scotland which was a nice surprise at how lovely it was. Even the weather stayed nice most of the time.

Anyway back in the gallery now and just finished painting a big splashy pink Splodges of red and orange which I actually painted most of outside the gallery one fine day. So I put it out on the easel after opening and a woman spotted it and took it straight away, ha ha. That's what happened with the other cockatoo painting, sold first day of putting it out. Lucky I managed to get some prints done so I didn't lose it completely!

Also just sold one of the serious investor paintings by  artist Robert Hagan and one of his more impressionist paintings called 'On The Run',which has proved popular with customers and was priced at $9,500, so wonderful start to my return. Two new Hagan's just in now. (see his page)

Passing of a good friend.

Four years ago Paul and I were invited to dinner by friends to meet at the local pub The Fox and Hounds, and they brought a couple of  other friends with them. One of these was  Sonia Borde, with whom I clicked immediately and we became instant friends. From that date we emailed constantly and then would meet up for lunches and coffees and talk like there was no tomorrow.

We would fill each other in with local items of interest and she would send me humourous emails as I would her. She was going to put paintings etc.  in the gallery but when her illness came back she was just happy for me to email her with the building of the gallery and everything new that happened, saying she was so proud of what we were doing.

We shared so much in common. She had many artistic pursuits whether it was painting, sewing, gardening, writing, painting backdrops for theatre and films  etc. and had so many stories of the interesting life she had led to that point.

She would talk about how she had travelled on the high seas and had many adventures and lived in exotic countries but I never got the complete picture as we would run out of time. I wish she had written a book about it all really. There is so much more i would like to know now that she has passed.

At her memorial service I got to meet Camilla and Charlie who have so much of her spirit in them. Her gentleness, sincerity, creativeness and warmness as human beings. She was so proud of them too. She was such a private lady though and wouldn't tell us a lot.

It am so pleased to have met her and shared a little of life's journey and now met her wonderful family too. Rest in peace, Sonia.

Wow, twelve months has flown and we (Capanart Gallery, Tamborine Living - really classy homewares - and Bling Indulgence - lots of bling accessories and handbags -  are getting ready to celebrate our aniversary with some drinks and nibbles on Wed. 22nd at 4pm. outside the front of the shops.  Everyone welcome.

Can't believe twelve months has gone and we have really enjoyed our little place here in Gallery Walk, the tourist strip in the Gold Coast hinterland. We all love meeting and greeting the public and dealing directly with our buyers, as artists, as much as they tell us they enjoy dealing directly with the artists of their artwork purchase.

Well, we have passed the six month mark now and things are going well. We started slowly and sales have been steadily building. We have adopted a bit of a co-op style set up and share the manning of the gallery between artists allowing ourselves time to paint.

Last week I painted a large sulphur crested cockatoo with his wings outspread and some flowers of a waratah tree against a stormy purple sky and even though the paint was still drying, Paul displayed it on an easel in the gallery only to have a lady come in and buy it for her husband before I managed to get some Giclee prints done. She is letting me have it for a few days to get that done luckily, ha ha.

More portrait commissions have been pouring in too which usually happens at this time of year for some reason : )

Kerry Nobbs work has been very popular and we have sold lots of originals as well as lots of his Giclee prints which are such good quality and guaranteed for a lifetime. They look so good on the canvas and are a great option at a fraction of the price of the originals.

Customers (as well as myself) are totally in awe of his lovely work and amazed at the subtle shadow colours in his sand dunes and the soft atmosphere he captures in his works.

Also his water reflections are to be marvelled at too.

The Robert Hagan paintings we have are also creating lots of interest as very enjoyable to look at, investment art. What a bonus to have such beautiful impressionist work when they can only rise in value. More will be coming in soon and hopefully of his vibrant galloping horses.

We have his books with collections of works and also lesson magazines which are the best I have seen. $7 each and $25 for the thick lesson book and $30 for the books of his art. 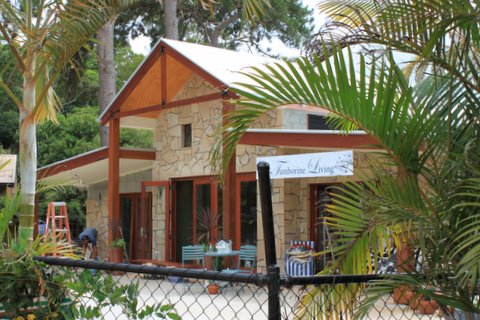 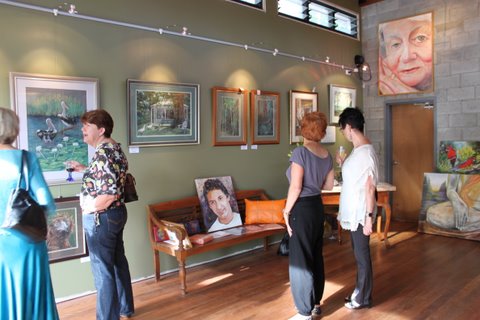 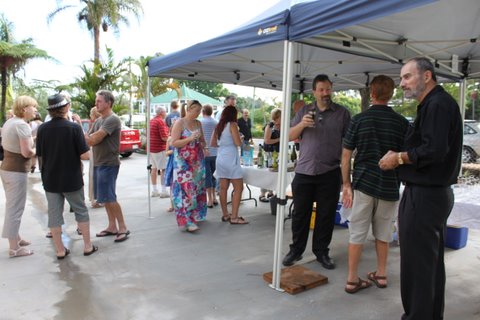 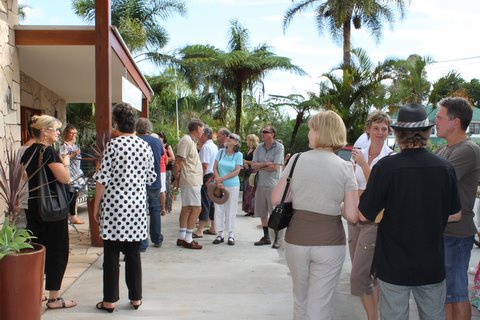 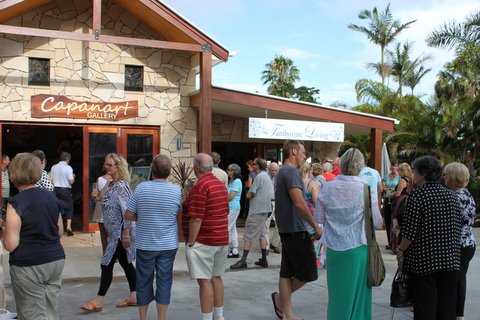 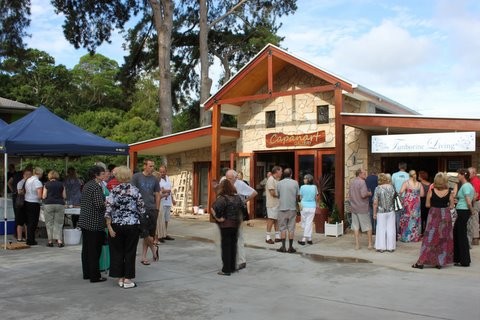 The opening of Capanart Gallery and other shops.

The grand opening for our new shops was on 21st December 2009 and was a great success!

We sent out the invitations and stocked up with nice nibbles and plenty of refreshments and had a great turnout of nearly one hundred people.

The morning of that day though was difficult because we had not recieved the hanging wire for the paintings or the lighting that fitted with the tracks until lunchtime and so were frantically throwing the paintings onto the walls right up until the guests arrived at 4pm.

The wiring was coming from Melbourne and was ordered weeks before but got recalled and then reordered without them telling us!

Thank goodness for the help from artists Kerry Nobbs, his partner Nelly and Glenda Garrett and husband Charlie, who hung around working hard to help us meet the deadline.

We were exhausted but satisfied when we had hung the last painting just as the crowd was spilling in through the gates. The marquis were up and wine chilled and boy did we need a drink after that, not to mention how hot it was that day too. 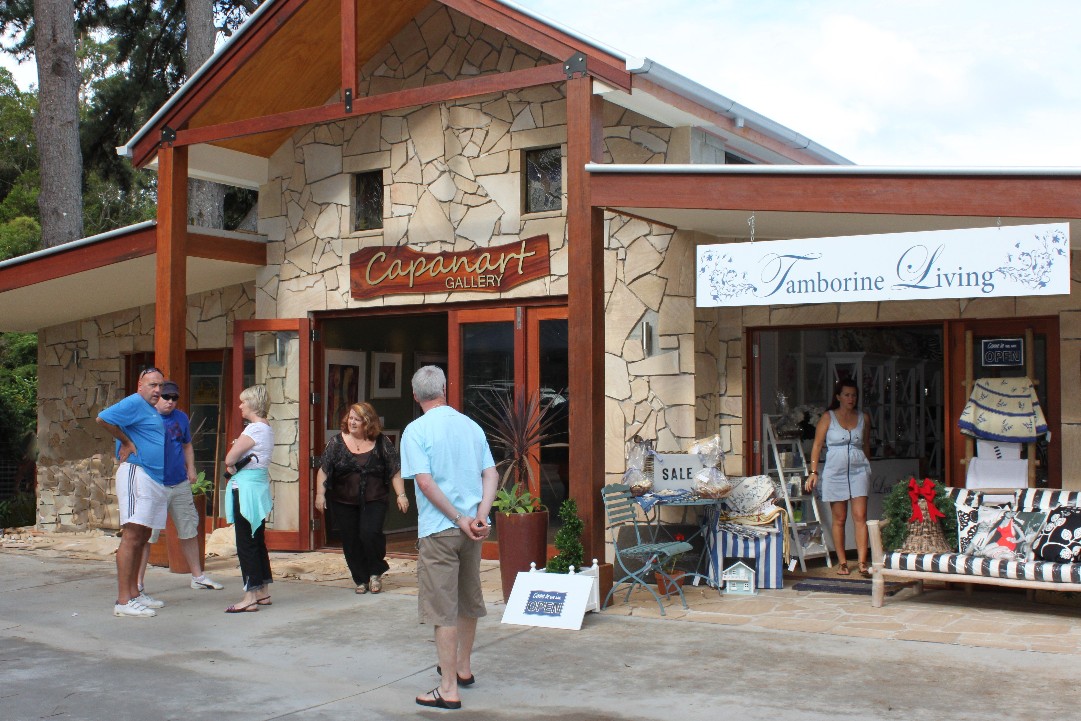